I’ve recently been given two inspection copies of the “Keynote” series by National Geographic Learning / Cengage and am considering whether I should adopt it as a set text for my EAP classes. In case anyone else out there is thinking about using it, here are my first thoughts of a review!

The series, like Cengage’s other title “21st Century Reading”, takes TED talks as the basis for the topic of each unit. The “Keynote” books train all four skills, as well as pronunciation and grammar. They include authentic listening tasks and critical thinking exercises, which I think make them quite appropriate for university classes, but actually the series seems to be targeted at a rather broad audience, especially regarding topic choice. I’ve been informed that National Geographic won the tender to use TED talks commercially thanks to their previous materials based on authentic input, and I do think that “Keynote” continues this tradition of good work. Each book has 12 topic-based units, and the topics are based on TED talks.  The talks are mostly by native speakers of different varieties English, though in the more advanced books some talks by non-native speakers have been included. These all have very clear diction, and thus provide some (though rather limited for such advanced levels!) practice at understanding various accents. The talks are not slowed down at all, but they are sometimes abridged, especially for the lower-level books. My initial impression is that the talks and excerpts are well chosen and well prepared for use in this textbook series.

In what I’d describe as ‘classic textbook manner’, the units start off by focusing on the TED talk, and then develop the language beyond this. The structure of all units is the same, which may be good for learners who like to have a common routine, though could also become repetitive. The first section of any unit focuses on comprehending the main idea and supporting evidence from the TED talk. This is followed by grammar and language noticing and practice, with activities which work towards spoken production and include some well-conceived communicative practice. The third section of each unit focuses on extensive reading, which often incorporates critical thinking skills and vocabulary work. And finally, each unit closes with functional oral/aural exercises, which move towards writing skills with some nicely modern and motivating tasks such as writing blog posts or  online profiles. After every two units there is a review section, which usually takes a case-study approach. For my taste this is a few too many ‘review sections’, but this may be appropriate in other contexts. I think it’s important to mention here that only the first section of each unit really uses the TED talk – far less than I was expecting from the adverts for this series! The rest of the sections work with authentic materials adopted from National Geographic publications, in a similar manner to their other textbook “Life”.

What I like about the “Keynote” series is that every student’s book comes with a DVD containing all of the video and audio material, sometimes with sub-titles. This is definitely a bonus over other series where there is just one DVD included in a class-set of books, and makes the series particularly appealing for those of us teaching classes where the number of credits requires a substantial amount of work from learners beyond the lesson time. The tape-scripts are also included at the back of the books, as are some role cards for extension activities, and a brief grammar reference section. The textbooks really feel like textbooks and not like workbooks – so learners can’t really write their answers into their books, in contrast to other series such as “21st Century Reading”. For university classes and adult education I find this more appropriate anyway, though that might just be personal taste. “Keynote” is also available as an e-book, and there is also an interactive workbook and other additional e-materials which can be purchased separately (I think a licence is for 12 months). What I find frustrating with the teacher’s book is that the answers to tasks are interspersed with other input and instructions in the description of each unit, which makes them sometimes time-consuming to locate and not practical for photocopying to allow learners to check their own work. 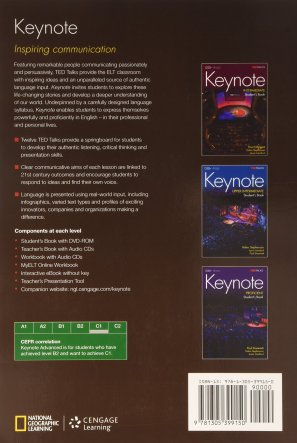 Overall, the “Keynote” series has more of a feel of preparing learners for professional use of English, so I’m not convinced that it is the best choice for academic settings, though the skills and grammar practised are generally appropriate. The amount of time a class would need to complete one level of “Keynote” would probably be about a year, at one-two lessons per week, depending on the amount of homework given; sadly this is another factor making it impractical for use on one-semester university modules. I am also a little disappointed that the biggest selling point – working with TED talks – has turned out to make up only about a quarter of the textbook. So I think my initial decision will not be to adopt this as a set textbook, though for Part 2 of my review I plan to try out some of the units with different class groups, and perhaps the students will convince me to use “Keynote” after all! Watch this space!