How would you say these example sentences?
a. I think that’s the right answer, but I’m not sure.

b. I think that’s the right answer, no matter what you say!

I’m guessing that “I” and “think” sounded different when you said these two sentences to yourself – and it is this difference that is interesting and helpful to understand, particularly for English learners.

My friend and colleague is doing post-doctoral research on the different functions of the chunk “I think”. Depending on whether “I” or “think” is pronounced as prominent (i.e. stressed), the chunk can either be a hedger or a booster, as we saw in the example sentences above. Her research is looking into whether these two functions of “I think” align with its function as part of a matrix clause or comment clause respectively. If that’s too hard-core linguistic-y for you, do not worry! This post is about how prominence in “I” or “think” is realised and perceived, and part 2 will then look at how we can help English langauge learners to understand and use “I think” effectively.

To set the scene… My colleague and I were phonetically coding audio recordings of English speakers reading example sentences that include “I think” – she needs the coding for her research. In some cases, we noticed that we had coded the prominences (i.e. stressed syllables) in some sentences differently. And that got us thinking: On a phonological and rather subjective level, when do we perceive “I” or “think” as prominent? And on a phonetic and objective level, how are “I” and “think” produced to be prominent? That is, what makes a stressed syllable sound stressed?

For those who are less interested in the empirical details of the study, skip this paragraph! 😉 We had 23 English speakers read 6 sentences including “I think” three times each. There were also other ‘distractor’ sentences that they read, and they were not informed that our research focuses on “I think”. That ratio of distractors to experimental sentences was 2:1.  The findings I’m reporting here come from our coding of  115 recordings of “I think” sentences – only one instance of each sentence per speaker. 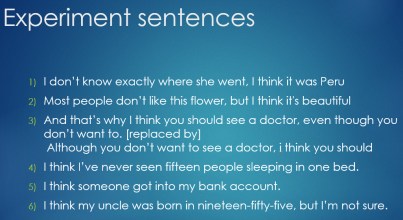 As a first step in answering our questions about the perception and production of prominence, we each coded the recordings, using P or p to show strong or weak prominence, using the Praat software- see image below for an example. In 96 cases, we both agreed on which syllables were the most prominent ones in the recording – an overlap of almost 83%. In 19 cases, we didn’t overlap exactly on whether it was strong or weak prominence in comparison to the rest of the sentence stresses, but both identified the same syllable in “I think” as prominent, and in 19 other cases one of us had not marked any prominence in “I think” and the other one had. Of these 19 where we disagreed, there were 13 cases where my colleague coded “think” as prominent, and I perceived no prominence in “I think” compared to the rest of the sentence.

And so we moved on to looking at what was different in the productions of “I” and “think” in these sentences that could help explain our differences in perceiving prominence. Generally, syllable stress, or prominence, is said to be a combination of pitch accents (i.e. higher pitch or pitch movement), longer duration, and higher intensity (i.e. volume/loudness). Some linguists assume pitch to be the most important factor, whereas others claim intensity to be the best predictor of a syllable being perceived as prominent. Since the literature presents some conflicting ideas here, we were motivated to look at all three aspects and see whether they could explain our differing perceptions of prominence. We coded the recordings phonetically for pitch, duration and intensity (also using the Praat software), to come up with the following findings.  The image below shows what the coding looked like – the yellow line shows intensity and the blue one pitch.

Is there always a pitch accent on the syllable we perceived as prominent in “I think”?Basically, yes. There was only one example among our 115 recordings where there was no pitch accent on an “I” that we both percieved as prominent. Interestingly, prominence on “I” was often associated with pitch movement, rather than a peak. We also noticed that, even when I had not percieved either syllable in “I think” as particularly prominent in the sentence, there was usually a pitch peak on “think” – which may explain 13 cases where my colleague percieved “think” as prominent and I had coded no prominence. So it seems that pitch is a fairly reliable predictor of when my colleague will perceive prominence. But what about me?

Next, we looked at intensity. Here, there was a less systematic correlation. We found that the more prominent syllable in “I think” is most often produced with more intensity. However, in 13 of the cases where we agreed on which syllable was prominent, the syllable we had marked as prominent was not the louder one – this was especially true for recordings of American speakers (11 out of 13 instances). Regarding the cases where we had coded prominence differently, intensity explained 47% of my colleague’s prominent syllables, but only 21% of mine. [My colleague was a little frustrated with me at this point – What IS it that makes syllables sound prominent to you???!!!]

The final phonetic aspect we looked at was duration. I should tell you that this is hard to measure, and phoneticians disagree on the best way to measure it, but that is a discussion for another time! In the cases where we agreed on the prominence of “I” in “I think”, it was always the speaker’s longest pronunciation of “I” in the sentence. Still, my colleague’s perceptions of prominence seem to be somewhat immune to the duration factor – even the long duration of “I” did not make her perceive it as prominent if pitch and/or intensity pointed to “think” as the prominent syllable. In 5 cases, though, this longer duration led me to code “I” as the prominent syllable, despite the pitch accent and/or higher intensity of “think”. So, it looked as if we were getting to the bottom of which factors create prominence they way I perceive it! Still, there was one case where the pitch peak was on “think”, an intensity peak on “I”, and it was the speaker’s longest “I” – and I still did not code either “I” or “think” as prominent!

From all this, we concluded that my colleague may have been influenced by all her research into the chunk “I think” and thus perceives prominence there more often than I do, as I focus on the whole sentence and compare any peaks in pitch, intensity or duration to all other words, rather than just within the chunk “I think”.

Still, overall, the order in which I have discussed the factors above seems to be their order of importance for creating prominence in our little study: pitch, intensity, duration. And for some conversation partners, like me, a combination of all three factors in one syllable may be necessary for it to be perceived as prominent.

So what does this mean for English langauge learners and teachers? The length of this blog post was getting a bit out of hand, so I’ve divided it up – Come back for Part 2 to find out about the practical applications of these insights!