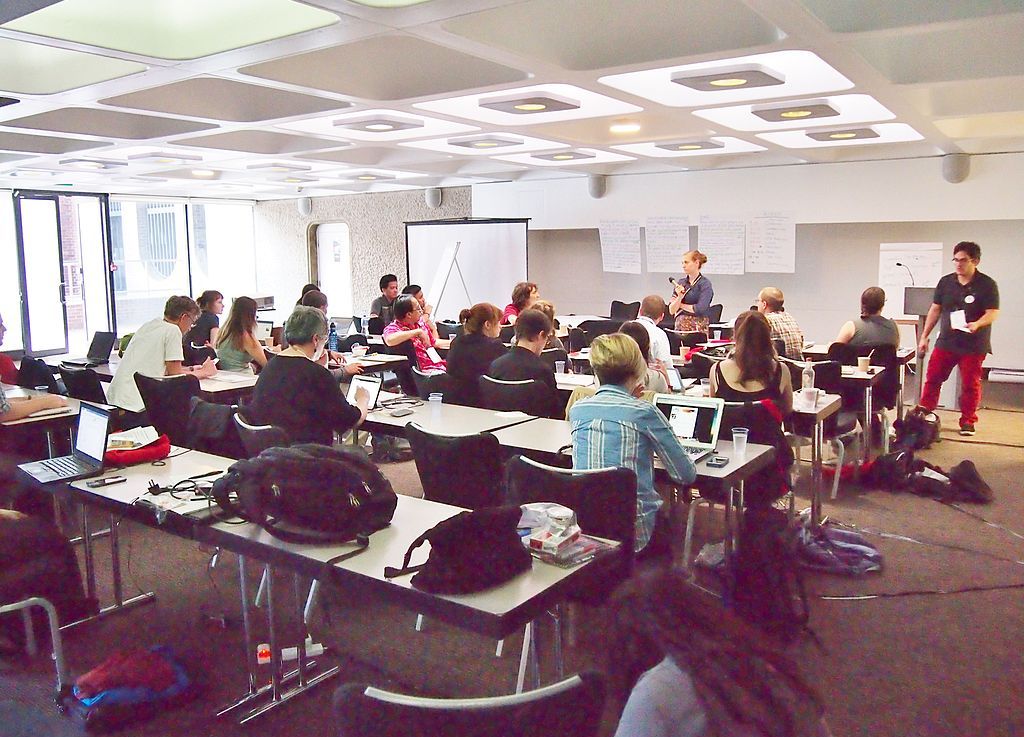 On the Materials Design itdi.pro course I’m currently doing, our tutor has prompted us to discuss:

When using an authentic audio or video it is important to use only English native speakers?

For me, the most problematic word here is ‘only‘. (Problem #2: Define ‘native speaker!) And so my answer would be a flat out No.

But that’s not much of a discussion! And so I’ve decided to re-formulate the question a bit, into: When should Non-Native Speakers be used in ELT audio & video materials?

And as with most things ELT… my answer is: It depends!

And as always, it is important and interesting to look at what it depends on…

Students’ language level. Some commentators say that only NS (=Native Speaker) accents should be used with beginner students, as NNS (=Non-Native Speaker) accents can be harder to understand. I can see some value in the point that accents which are deemed harder to understand for a certain group of learners should maybe be introduced once a good level of grammatical and lexical understanding has been achieved and they have been well prepared for the listening task.. But, I think we have to remember that NS also have a huge variety of accents and don’t always speak clearly, so I’m not convinced that ‘hard to understand’ is a NS vs NNS difference….

Language Learning Goals & Motivations. For me, this is the key argument regarding listening comprehension: If the students are learning English (or whatever language, really!) in order to be able to communicate with native speakers, for example moving to live or study in a country where English is the main language spoken, then it makes sense to expose them mainly to NS accents and dialects through audio/video material. If they will mainly be communicating with other NNS, then it is rather more important to expose them to these when training listening skills. Indeed, in today’s globalised society, it is becoming less and less realistic to prepare English learners only to communicate with NS, as something like 75% of all interactions in English are between NNS (see Crystal 2003).

I believe students should learn by using materials that are authentic for the contexts in which they are going to need to use English. A case from my own experience: I teach EAP, and when I think about preparing students to participate in seminars at a university in the UK or USA, for example (most popular countries among my students), then I definitely need to prepare them for the fast-paced, messy, interrupted, overlapping discussion, which will probably also involve cultural norms of turn-taking, etc. And it seems to me that the best material for this kind of thing would be authentic recordings of speakers in exactly this kind of seminar setting. However; find me a British university seminar that doesn’t include at least one NNS… probably rather rare these days! So really, when I think about it, it’s probably the NS + NNS combination that makes most materials most authentic!

Having said that, simply exposing learners to different accents, dialects or varieties of English will probably not suffice to really help them learn and understand – they will need training in listening out for and understanding differences. Though, again, this is not an NS vs NNS point!

So far, I’ve mainly been coming at this topic from a focus on listening comprehension. But there is also another factor in this debate; the speech production side. With this in mind, there is the claim that …

Students’ need NS pronunciation model. I’ve recently heard several comments to this effect, and indeed I agree somehow intuitively with the feeling that an NS pronunciation model is better for beginner learners to learn to imitate. But then I do sometimes (when involved in discussions like this) wonder why?

As a basic and overarching goal of any language learning/teaching, I’d take communicative ability and intelligibility. For the sake of the latter, I think maybe learners should not learn to pronounce new vocabulary in their teacher’s accent; if this becomes combined with their own accent, it might render the words incomprehensible to speakers with other L1s! However, several researchers, especially in the area of ELF, have suggested that we shouldn’t necessarily take NS pronunciation/native-speaker-like-ness as the overarching goal of ELT anymore. Still, I do still think that many learners see this as their ultimate goal, and thus it may we what we’re paid for – our job to help them reach it? And besides, the question that then remains for me is How will NNS be mutually intelligible if they’re not taking some kind of vaguely common standard as their starting point? – But maybe I haven’t read enough ELF research to understand this…

(Also, I wonder what the ultimate goal of language learning would be if it’s not to be as competent in the L2  as in our own native language …?)

5 thoughts on “The Native Factor in ELT Materials”